Take a look at the image below and see if you can spot the differences between these two IV giving sets: 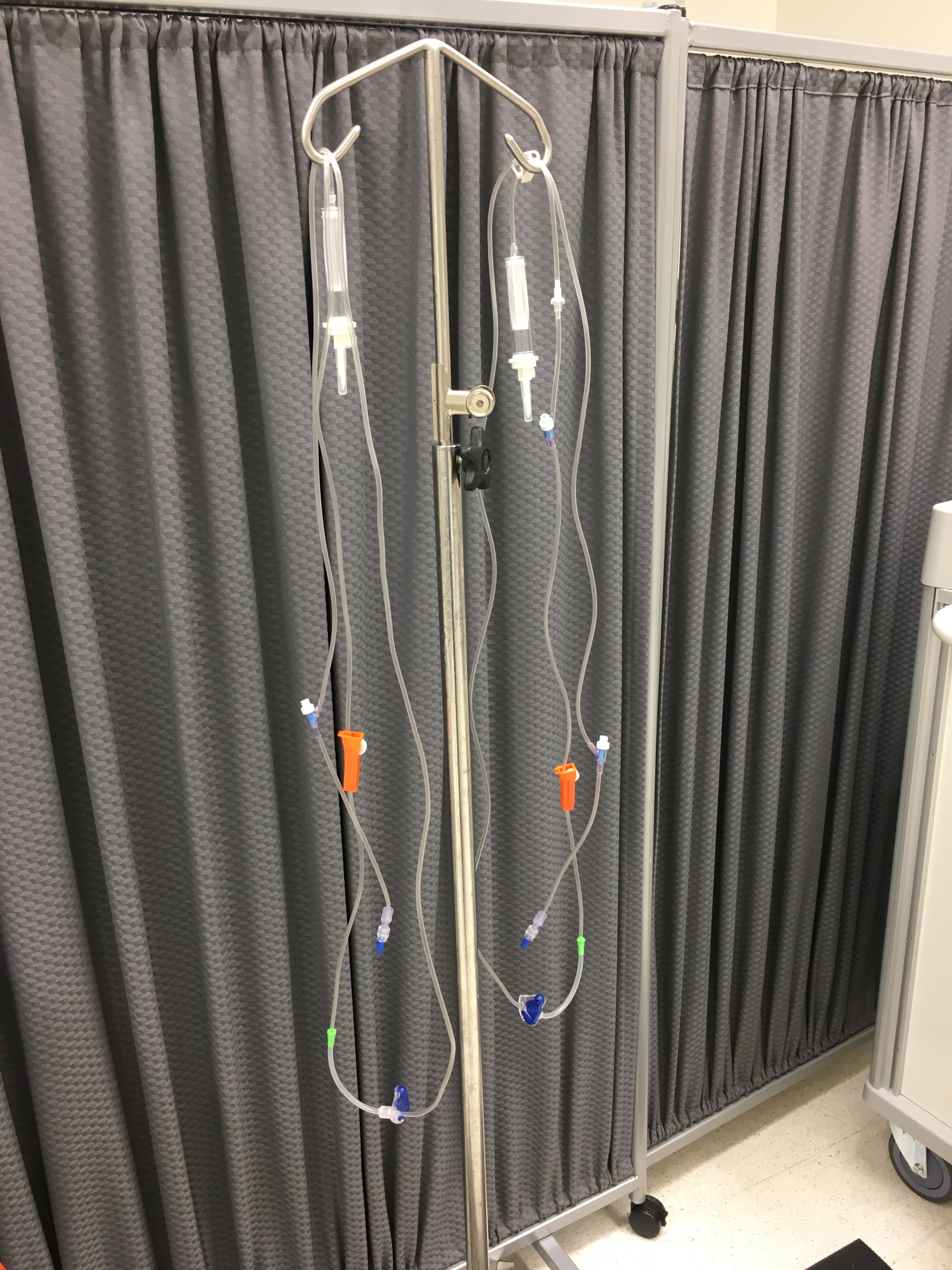 Maybe the packaging will help? 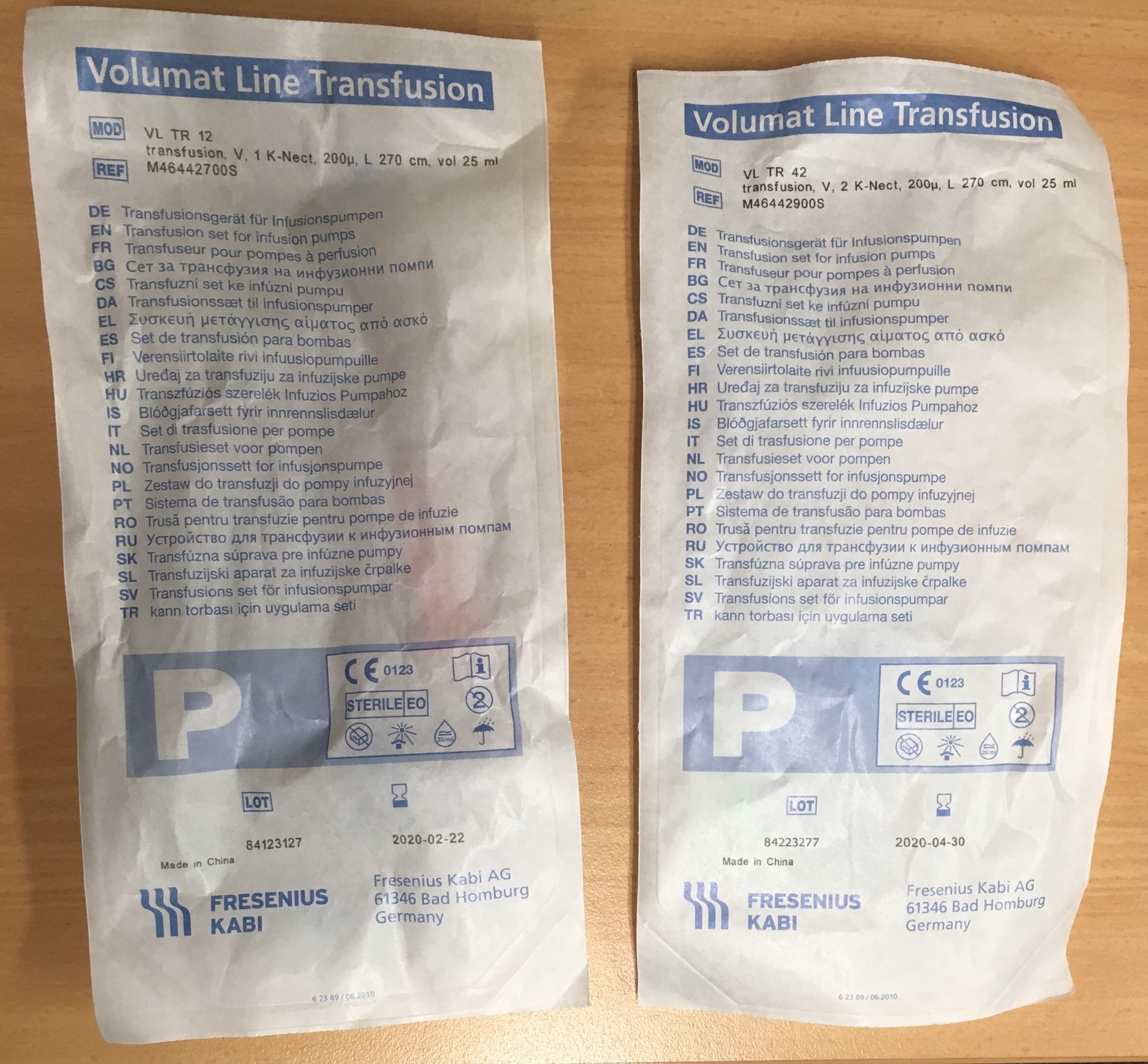 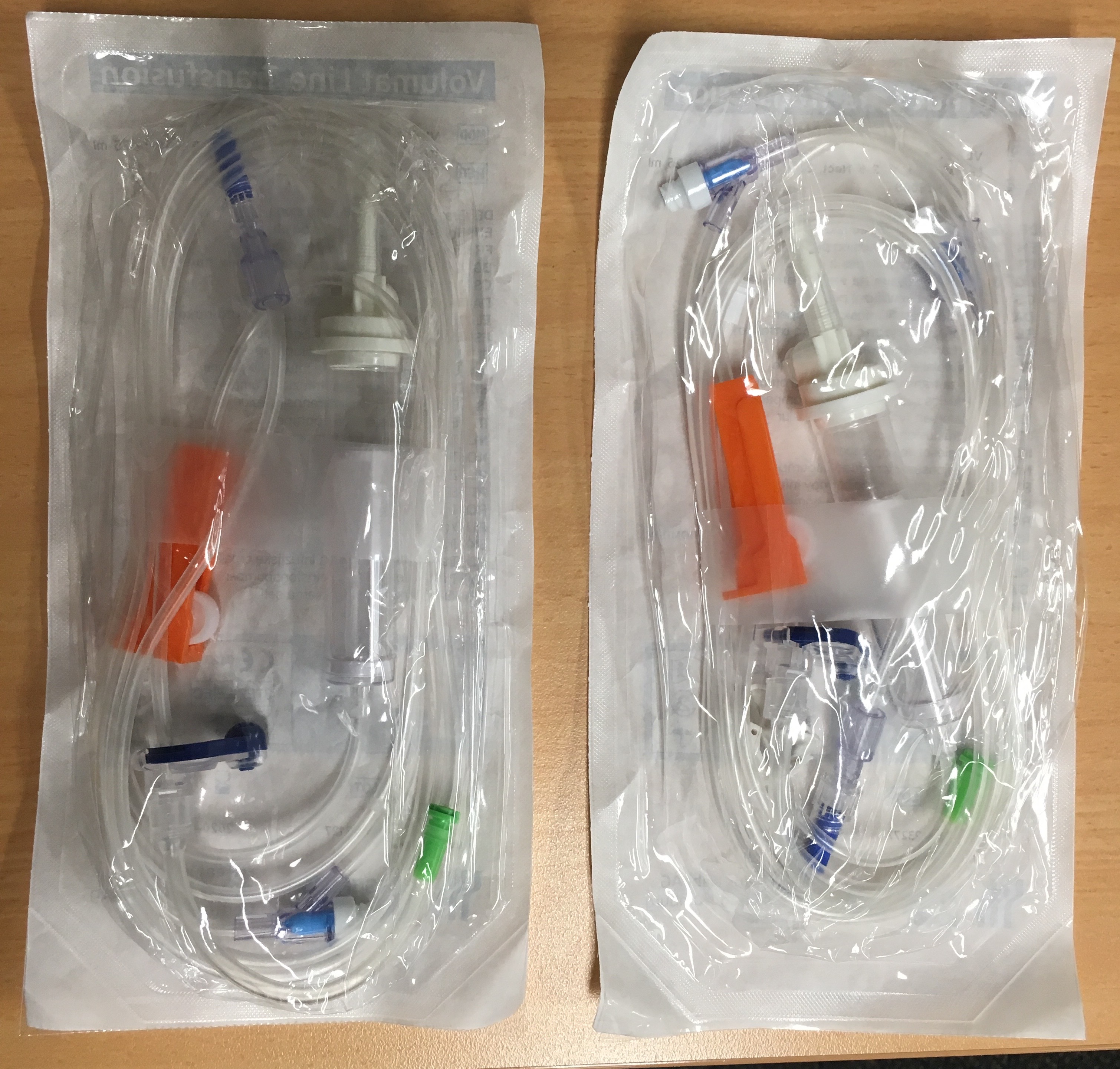 How did you go? There are actually a few differences between them, but there is one in particular that I am interested in, and you should be too. Can you guess which one it is? Yes, that little white bit circled in red is what’s called a “one-way”, “back check” or 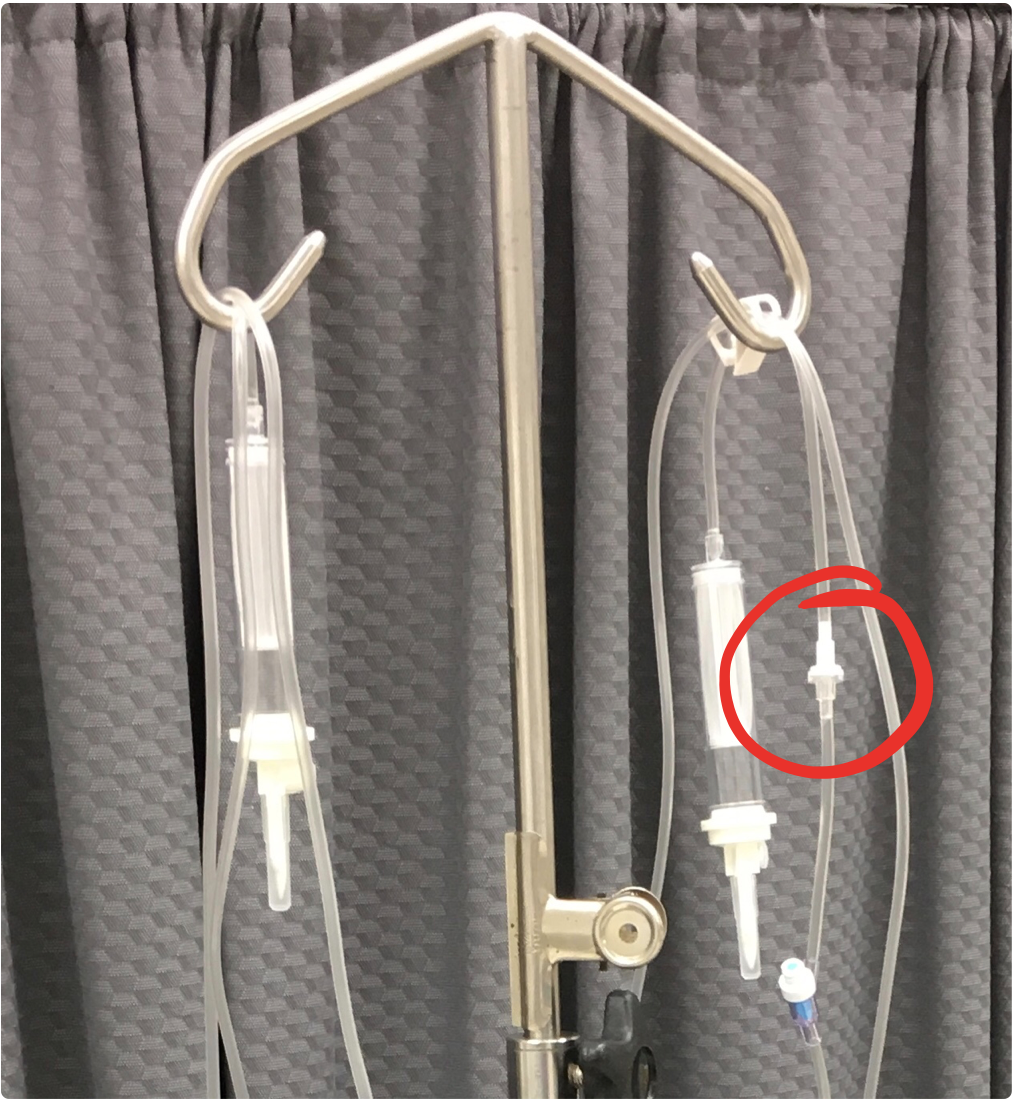 just “check” valve. As the name suggests it ensures fluid in the line can only move one-way i.e. from the IV fluid bag and into the patient. This valve is there so that if you are running a secondary infusion it will flow into the patient, rather than back up the primary line and into the fluid bag. A visual representation of what this valve does can be seen in this video:

The giving set on the right has a check valve while the one on the left doesn’t. Without the check valve, the injectate can flow both up and down the line, with the result that there is still some of it left in the line over a minute later. Depending on the volume and pressures involved, it is even possible for some of the injectate to “backtrack” up into the IV fluid bag itself. 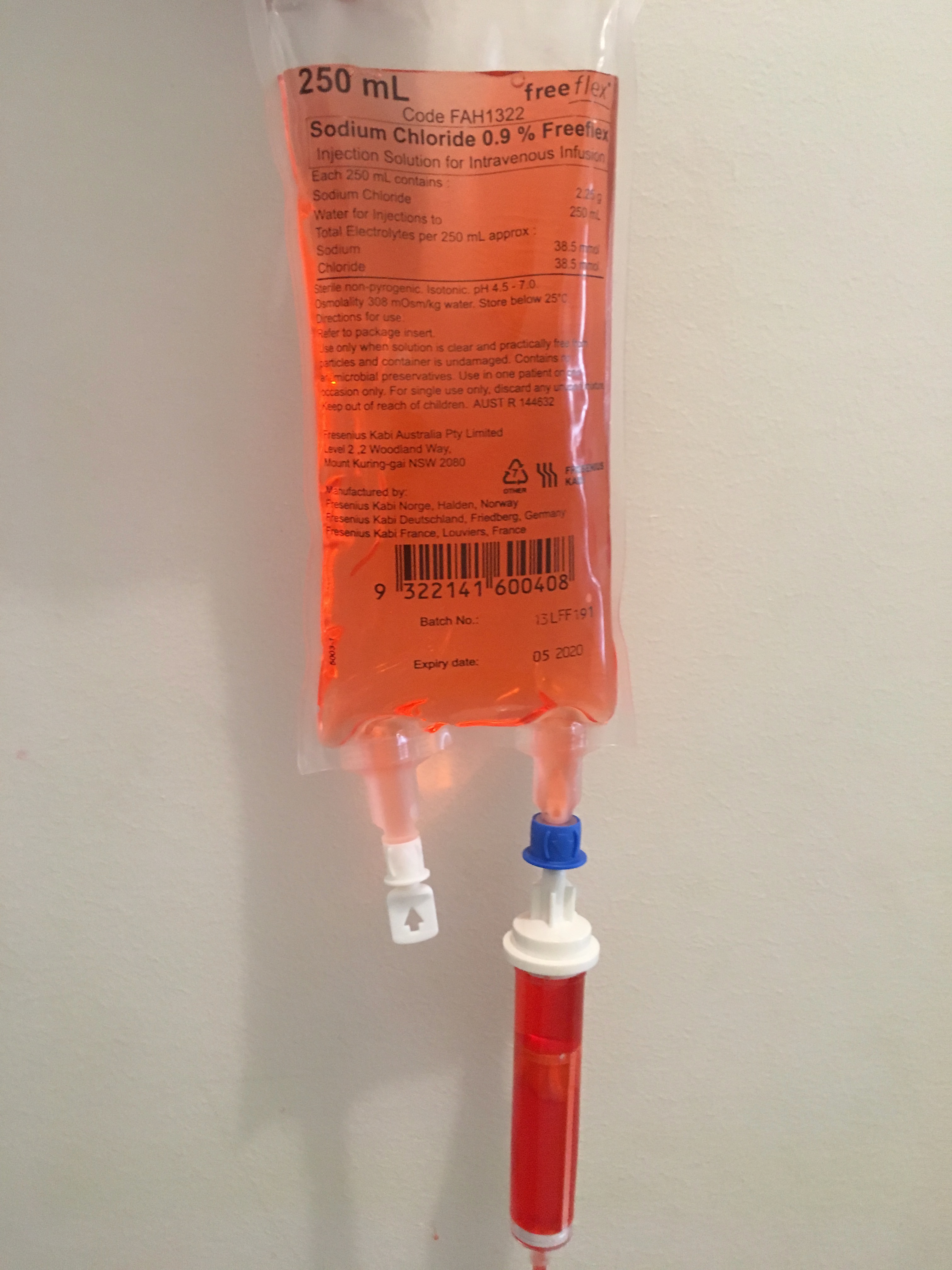 While this is obvious when the injectate is an indicator dye as in this test, the vast majority of IV medications are clear and colourless, so this backtracking won’t be immediately apparent. As well as the patient not receiving the intended bolus dose, they will also receive an ongoing infusion of the drug at an unknown rate until the IV bag is emptied or replaced, and the dead space of the line is flushed through. The time taken for this to occur is highly variable, and may not happen until the patient is back on the ward. Depending on the specific drug, the result can range from no harm at all, right up to a lethal outcome.

Now, if you combine the fact that these two giving sets look nearly identical, along with their disparity in performance characteristics, you can start to see the latent safety threat present in a system that includes these two types of giving sets. For example, if you are used to using the giving set without a check valve, you become accustomed  to using the “hack” or “workaround” demonstrated in this next video in order to avoid this backtracking:

But if you work somewhere with giving sets that have the check valves, then there is no need to kink the line. But problems then arise if you unexpectedly end up with a line without a check valve. This could be for a number of reasons including a change in supplier or rotating to a different hospital. Depending on your training and work history, you may not have given check valves a second thought or even be aware of the existence of giving sets without them. Furthermore, you may not know what the valves look like, or be able to easily detect their absence. You may then make the reasonable assumption that all giving sets will behave in the same way as the ones you have always used. You’ve never been shown the trick of kinking the line, so you inject as you always have, thereby unknowingly creating the potential for the backtracking seen above. It was, in fact, this exact scenario that led to my becoming aware of the issue and looking at it more closely. My hospital switched over to lines with check valves some years back. However, the addition of this engineered safety feature resulted in a change in a behaviour whereby many staff no longer kinked the line when injecting drugs. This coalesced with some other design flaws and system failures to result in a near-miss for a patient at my hospital.

This patient was transferred from another hospital for semi-urgent surgery. No one noticed that the giving set the patient was transferred with didn’t include a check valve. When the anaesthetist started injecting propofol, they noticed it backtracking up the line rather than into the patient. They stopped injecting before the patient received any drug, replaced the line, and then continued without any adverse outcome. This patient was lucky, as there are numerous reports of patients coming to harm from this sort of backtracking.

In this instance, the anaesthetist involved submitted a near-miss report, and as a member of our Human Factors Committee, I was tasked with investigating it. As I did, I discovered this issue was more complicated than originally thought. As well as the lines themselves and the packaging being very similar, the close-ups below show that the model and reference numbers were also very similar. In all that text, there are only 3 digits that differ. There is also no mention of check valves.

And within the hospital ordering system, the same issue arises (click on the image to see a larger version):

These two items are right next to each other in the database, and while one does mention the check valve, it could be easily overlooked, or, even if noticed, there is still the risk of selecting the wrong checkbox which is at the very edge of the screen. Additionally, the boxes the giving sets are delivered in are also near identical. This problem of visual similarity, especially when combined with co-location, is a well-documented source of drug error, and it’s not surprising that medical equipment is susceptible to the same problem. Others have also noted this risk with IV giving sets:

This concern was further validated when the wrong giving sets were delivered to our hospital at least twice since staff were notified about this near-miss. The first time it was identified by a nurse when they went to set up an IV line, while the second was picked up before the boxes were unpacked. We are unsure what happened in the first instance, but when we looked into the second case, it turned out that we’d ordered the correct item, but a rogue box of giving sets without the valve ended up being shipped with our order. This showed that confusing these two giving sets can happen right along the supply chain.

So as you can see, this is quite a complex problem, but one that I think needs to be addressed. At the heart of the issue is the fact that there is significant variability between and within manufacturers as to whether or not IV lines have a check valve. Added to this is the variation in terminology, where terms such as one-way valve, check valve, anti-reflux valve etc are used interchangeably to describe a wide variety of valves that look and behave differently. Further complexity is added by a lot of manufacturers making a distinction between gravity-fed giving sets and pump-fed giving sets, when in fact pump-fed giving sets can become gravity-fed once they are removed from the pump.

As I continued to dig further, I found that most of the interest in this area has been in relation to situations involving multiple IV infusions, or, more specifically, 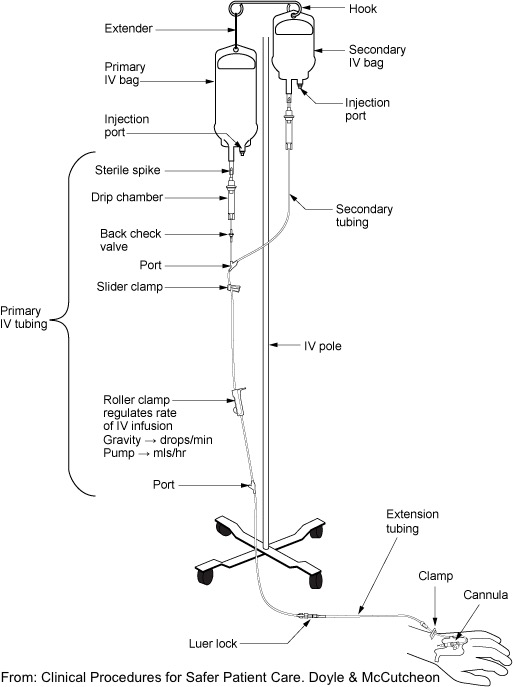 where multiple infusions are going through a single IV access site (aka “secondary infusions”). This includes TIVA, and with this form of anaesthesia increasing in popularity, along with an expanding formulary of IV medications, and an increase in demand for and intensity of intensive care, secondary infusions will only become more and more common. Furthermore, a bolus dose into a giving set, as in the near-miss above, can be considered a special case of a “secondary infusion” as the implications of the presence or absence of a check valve are the same, or indeed even greater due to the higher pressure needed to administer a bolus. In these settings, the advice is essentially unanimous that when administering a secondary infusion, the primary infusion line should have a check valve to prevent backtracking:

“When a piggyback or secondary infusion is necessary, lines should only be attached to primary infusion sets with a back-check valve”

The manufacturer themselves make a similar recommendation.

But these recommendations and guidelines still require and are dependent on education and human memory, and all the pitfalls that they present. The wording in a Medical Device Alert from the MHRA reflects this: 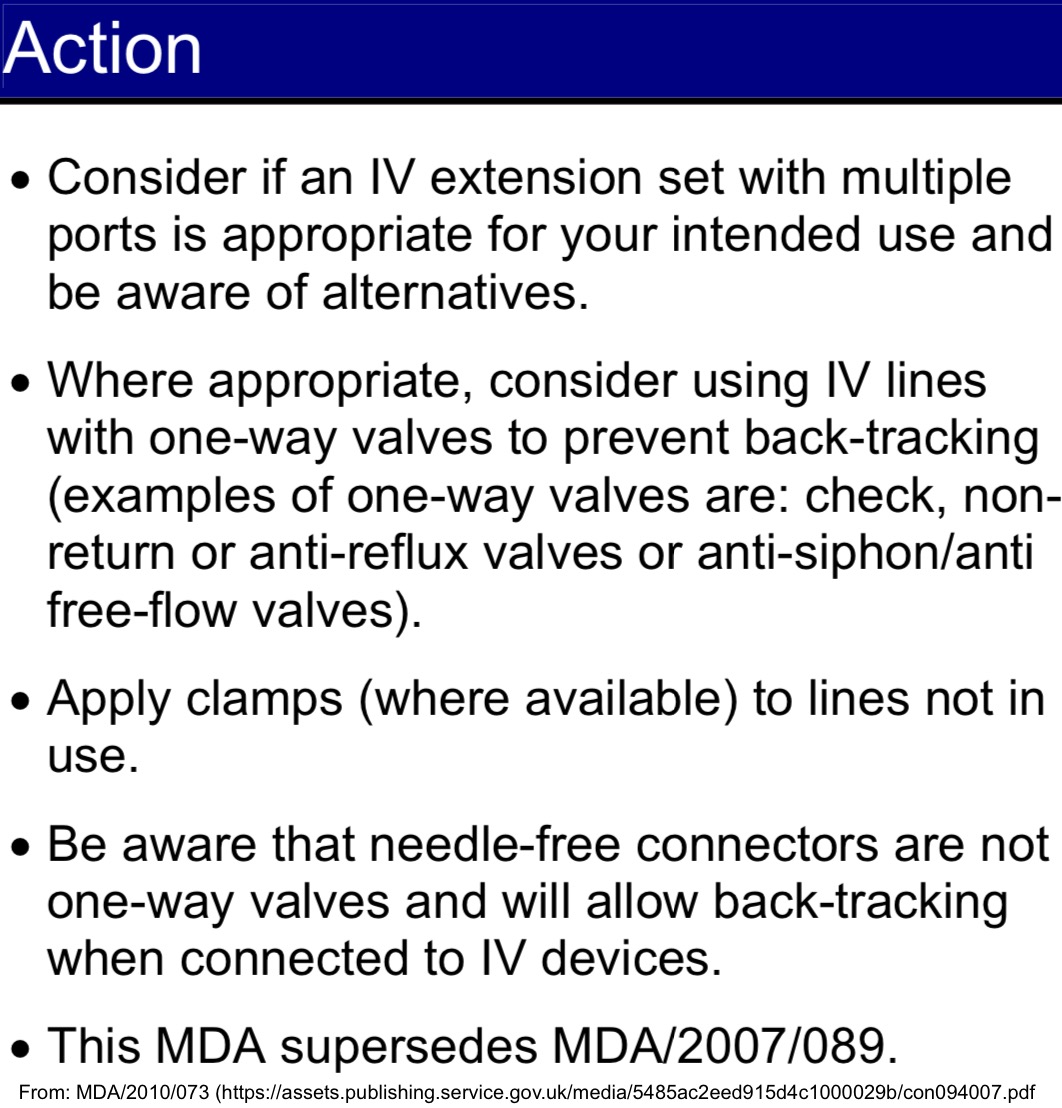 The use of terms such as “consider” and “be aware” highlight the education and cognitive load required to maintain safety, and “where available” reveals another source of variability in the giving sets. Furthermore, in my experience, these recommendations are not widely known, and if there are official guidelines, they are not readily available. Indeed the warning from the manufacturer above was on a page in their catalogue that I had to request from them. There was no such warning on the packaging or giving set itself. So trying to draw all these threads together, from the above it can be seen there are a number of aspects of the current system that, when combined, present a significant threat and that change is required. These include:

The current approach appears to be that giving sets without check valves are the default, while those with check valves are only available for the specific use case of a secondary infusion. But given the points listed above, I believe this needs to be reversed. The default should be that all sets have a check valve, and then a case made for situations where the presence of the valve might cause problems and a giving set without one is required. So far I am aware of only two concerns that might warrant this, namely that these valves can cause haemolysis (or interfere in some other way with blood products) during a transfusion, and their potential to result in increased resistance to flow. But speaking to manufacturers, there are a number of different mechanisms by which a check valve function can be produced, and ways to design them such that the impact on red cells and flow is minimal. Indeed, in the catalogue for the giving set above with the check valve, it explicitly states that it’s suitable for transfusions:

But even if there are situations that genuinely require a giving set without a check valve, these should be the exception rather than the rule. If these sets are needed, there should be a requirement for them to be clearly identified as lacking this safety feature, and ordered and stored in a way that keeps them separate from the standard giving sets that include the valve. Implementing this kind of systemic change won’t be easy, but fortunately, I’m not the only one thinking along these lines. I recently discovered this consultation document that had its genesis in the Safe Anaesthesia Liaison Group and was published last year. It raises similar concerns about IV giving sets and one-way valves, recommends some “Proposed Actions”, and importantly puts the call out to try and crowdsource some answers to questions regarding potential unintended consequences of mandating check valves, such as those I mentioned above.

So i’ll finish now with those questions, that you might be able to help answer, so that we can begin to make progress on this important patient safety issue at the regulatory level, but I also ask you to take at look at your own workplace, and see if you can make more immediate changes there. Let me know how you go.