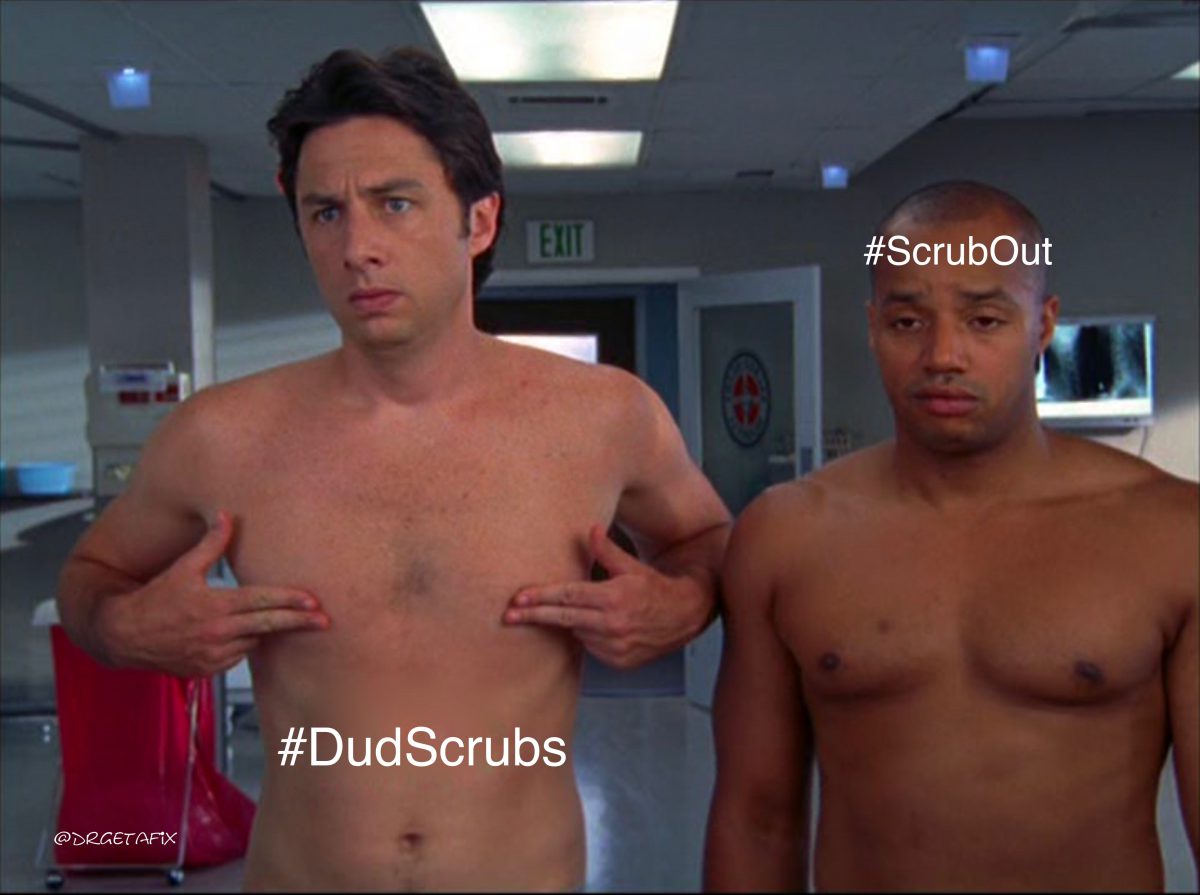 An unavoidable part of working in operating theatres is the requirement to wear what is formally known as “Perioperative Attire”, but casually known as “scrubs”. While the term “scrubs” is now used to refer to similar clothing worn anywhere in the hospital, the primary purpose of theatre scrubs is to reduce the introduction of environmental pathogens into the theatre environment, thereby reducing the incidence of surgical site infections. Most hospitals require staff to wear scrubs supplied and laundered by the hospital. So essentially, scrubs are a mandatory workplace uniform, supplied by the hospital, to be worn by staff to improve patient outcomes.

You would expect, therefore, like uniforms in other safety-critical industries, that appropriate time, attention, and cost would be expended in order to ensure that scrubs were fit-for-purpose and available when necessary. Furthermore, along with staff, equipment, medications, regulations etc, scrubs form part of a complex system of patient care. Therefore scrubs need to interact with other elements of the system, especially the staff wearing them, in such a way “to optimise human (staff and patient) well-being and overall system performance”. Unfortunately, a lot of the time, this is not the case.

Scrubs have always been a source of frustration for me. For example, the number, style and location of pockets are usually inadequate, the waist fastening mechanisms unreliable, and “clean” scrubs in various states of disrepair are common. But while frustrating, most of these issues had workarounds, and I was generally able to find an “appropriate” size and get on with my work without too much hassle. However, in recent days, I have become aware that scrubs, or often a lack thereof, are a much greater source of variability and frustration in the operating theatre environment than I had previously realised. Furthermore, this variability combines with other system elements in ways that are undesirable for both staff and patient well-being, as well as overall system performance.

It started with a relatively innocuous tweet by me, noting the apparent addition of RFID tags to our scrubs, with the supposed reasoning being improved tracking of laundering.

I think the RFID tag that seems to be contained within this recent addition to our scrubs, is the result of, or in anticipation of, a crackdown on tracking laundering of periop attire. @patientsafe pic.twitter.com/EGQXzp0T94

Amongst the replies to this tweet was one that I found quite surprising.

One of the ways ours was used recently was to ‘stop people stockpiling scrubs’- scanning lockers for RFID tags and opening them if scrubs in locker.

While I was appalled that a hospital would invade their staff’s privacy in this way, it also got me wondering why staff were stockpiling scrubs in the first place, and why hospitals so were so desperate to prevent it? So I asked Twitter, somewhat tongue-in-cheek, the following question:

Problem: Staff are hoarding scrubs in their lockers.

A: Secretly scan their lockers & invade their privacy by opening those containibg scrubs?

B: Chat to staff & ask them why scrubs are being hoarded, & work together try to find a solution?

As is often the case with Twitter, it wasn’t long before I started getting answers. However, this tweet had obviously struck a nerve. I was surprised not only by the volume of replies but also their content. Some were funny, but many were rather appalling stories of the lengths some people had to go to to find scrubs that fit, and the workarounds they had developed when the only ones available didn’t. Some tweets also showed that it wasn’t just staff being affected but patients as well, and there were also further examples of poor polices & responses from management.

“Let’s produce the bare (see what I did there) minimum amount and variety of scrubs, that are easy to produce, easy to wash, at the lowest possible cost, and keep them in circulation as long as staff aren’t “technically” naked.”

rather than the more desired (deep breath)

“Let’s recognise that our human staff come in a variety of shapes and sizes, and create scrubs for them that recognise their need to perform safety-critical work without the fear of humiliation and that actually support their work rather than get in the way of it, and in large enough quantities so they don’t waste time and mental effort finding scrubs each day, and resort to workarounds that are counterproductive to the purpose of the scrubs in the first place.”

Now, at this stage I’m willing, perhaps too generously, to give them the benefit of the doubt and assume that they just aren’t aware of the issues and that if we enlighten them, they will start to rectify them. So, to that end, a campaign was started on Twitter to #ScrubOut #DudScrubs. Below you will find tweets describing some of the many and varied problems staff face in relation to scrubs, some of the workarounds they have developed, but also some positive examples and ideas for how we might improve the situation.

I’m keen to add to the collection, so please use #DudScrubs to tag your own examples to make it easier for me to find them. Once we’ve collected enough, we can start discussing ways to approach hospitals and push for changes to be made.

UPDATE: I have now started to categorise the #DudScrubs tweets. You can find them here. I have moved the tweets that were previously listed here over to that site. Below is now the feed for the #DudScrubs and related hashtags.

I see your short sleeved scrubs and raise you a Scromper! #DudScrubs

20 bucks to the first person who shows up to rounds (unannounced and not staged!) in scrub shorts and stays in them for their entire shift

@ffolliet This makes my heart sing! Bravo to whoever achieved it.. 👏Compare and contrast with how I felt coming into work for the nightshift on Monday and realising I’d be tripping over my too long trousers all night!

No one knows what it means, but it's PROVOCATIVE

They only had large scrub bottoms left

So you know that thing where you realize there is a pair of underwear wadded up in your pant leg? Yeah, so like that, except these are hospital scrubs and these are not my underwear.

Disposable scrubs - is this some new low for theatre sustainability?