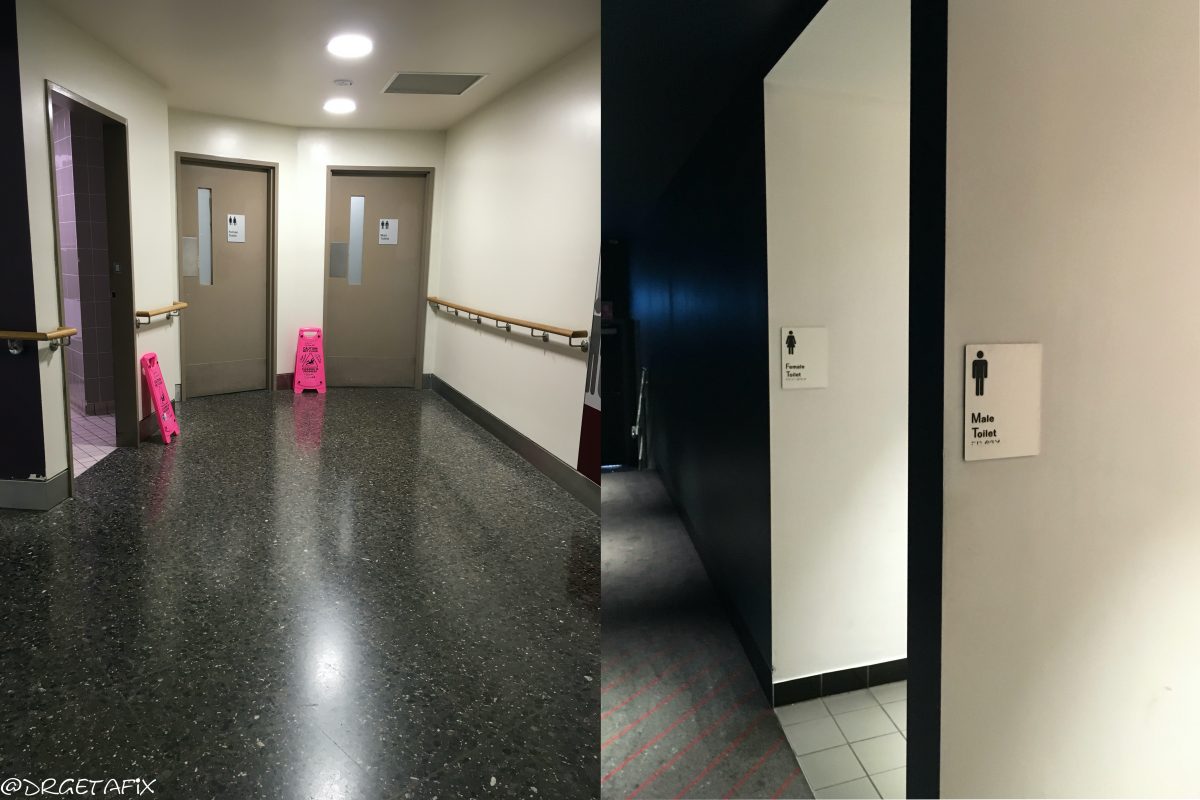 In recent years, I’ve developed an interest in design, and in particular how both good and bad design impact humans. One outcome of that newfound interest was a Twitter account, @DunnyDesign. You can read a bit about it here, but it essentially documents and considers various aspects of toilet and bathroom design that I come across in daily life.

Probably the first aspect relating to toilets design that made me sit up and take notice, and was likely the impetus behind @DunnyDesign, was when I noticed that public toilets, especially those on large commercial premises such as shopping centres and cinema complexes, had slowly but surely transitioned from a “double door” entry to, what I refer to as, a “maze” entry.

By this, I mean that, historically, most public toilets required you to open at least one, but very often two, doors to get into the area where the cubicles, urinals and washbasins were located. But then one day it struck me that many of them now had no doors, but instead, you had to walk through a short, twisting “maze” to get into the main area.

This video provides a couple of examples of each:

This slow change, like so many design features in the built environment, was 99% invisible. I’m sure the change had been going on for years, but I’d never noticed it before. However, once I was aware of it and kept an eye out for it, I realised it was quite widespread.

The natural progression from that point was to ask why the change had occurred. Was it just the latest fad in architecture, or was there an intentional design philosophy underlying it?

My initial hunch was that it was deliberate. I recognised that the winding maze entry maintained adequate privacy for those using the toilets, but meant patrons didn’t have to touch any of those nasty, fomite door handles or push plates to get in or out of the bathrooms. I don’t know if this was why the design of public toilets changed, but I knew it could have potentially significant public health gains in terms of reducing the spread of infectious disease. This aspect is even more significant in the current context of the COVID-19 pandemic.

The second implication I recognised early on was that it would significantly improve accessibility. Rewatch the video again, and try to imagine getting in and out of each of the bathrooms in a wheelchair or while using some other mobility aid, or pushing a stroller with a baby in it while wrangling a toddler!

On a more morbid note, as I continued to mull over possible reasons behind the change, I thought of potential security improvements too. I suspect it would be much easier to escape a maze entry bathroom than a double door entry one if threatened by someone, and any screaming would more likely be heard by others outside the bathroom if there aren’t any doors blocking the sound.

As yet, I don’t have any hard evidence to back up my initial hunch, but I’m only in the early stages of looking. So, if you are aware of any aspects of the history behind this change in dunny design, or know of any research studying the impact of these changes on individual users and the community, please let me know.