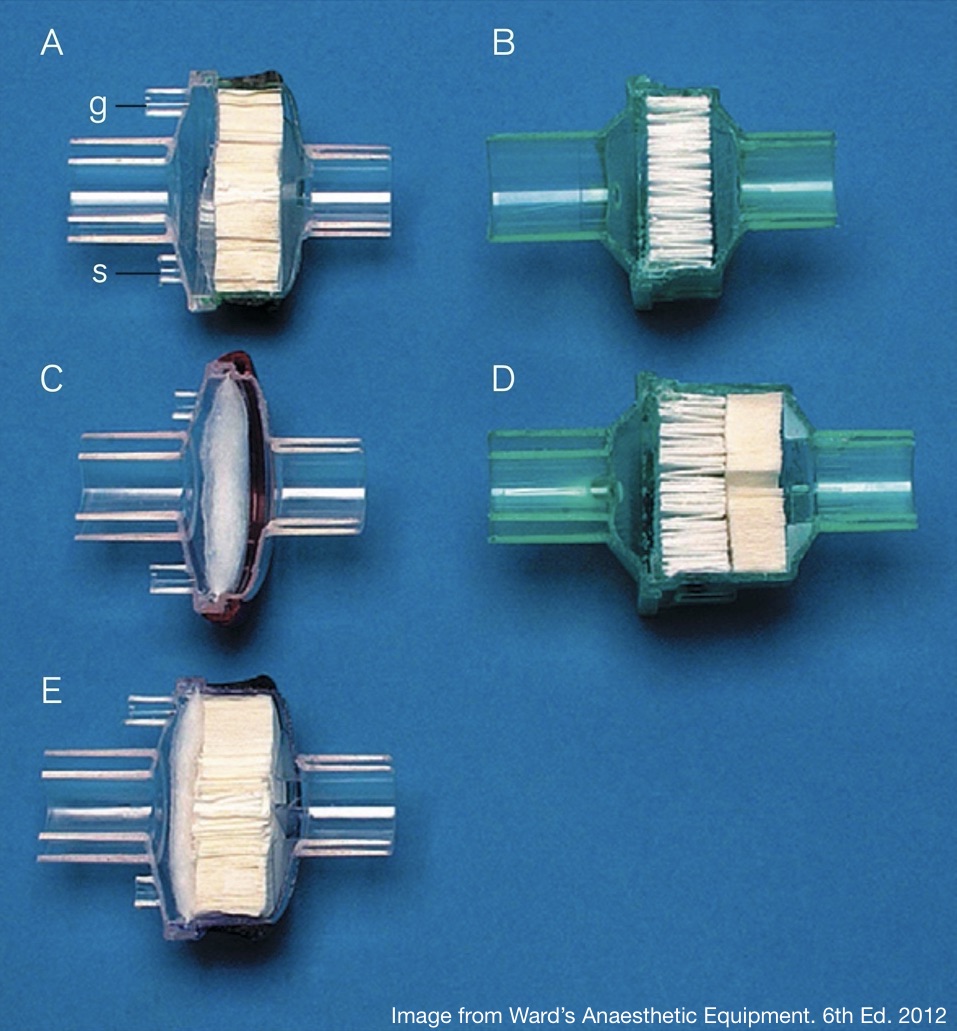 I recently submitted a “Letter to the Editor” of the BJA in response to the clever study by Zhong and colleagues demonstrating that the use of high fresh gas flows (FGF) during TIVA produces a cost-saving with, importantly, no adverse environmental consequences. My letter was responding to their conclusion regarding the impact of high FGFs on humidification of inhaled gases, and specifically the issue of heat and moisture exchangers (HMEs).

The letter was edited and shortened significantly during the review process, so much so that I felt some important discussion around a commonly misunderstood device was missing. The published letter is now available here,  but I felt it might be helpful to make the full text of the original letter (with some minor corrections) publicly available, so I have presented it below.

You can also find a Twitter thread I did on it here:

I think it’s time for a thread on the “Three F’s” of gas delivery in anaesthesia.

It’s not as simple as I once thought, so buckle up!

And a previous blog post I wrote on filters here.

The paper by Zhong and colleagues involving an economic and environmental cost-analysis of differing fresh gas-flow (FGF) settings during TIVA raises an interesting and important point regarding the relationship between the FGF and the degree of circuit humidification. The concern is that the higher FGFs recommended in their study could result in patients being delivered gas with inadequate humidification. However, they address this by stating that “modern [humidity moisture exchanger] HME ﬁlters are highly efﬁcient at maintaining the inspired humidity well above the acceptable limit across a wide range of FGFs”, citing a meta-analysis and two of its included studies.

At this point, it is helpful to clarify some potentially confusing aspects relating to HMEs and breathing system filters (BSFs). As Wilkes describes, HMEs are “intended to conserve a portion of the patient’s exhaled heat and moisture, and condition inspired gas by warming and humidifying it.” On the other hand, BSFs “are intended to reduce the transmission of microbes and other particulate matter in breathing systems”. He then goes on to list the five different types of devices:

To further complicate what seems like a simple piece of equipment, the filter medium, in both electrostatic and pleated filters, has some degree of intrinsic HME function. However the level of intrinsic humidification is quite variable between devices, and it will be significantly less than that provided by a dedicated HME or a combined HMEF.

Unfortunately, despite this multiplicity of devices, with significantly different filtration and humidification capacities, the term “HMEF” is often used a catchall term for whatever device is placed between the patient’s airway device and the breathing circuit during general anaesthesia. This was the way I used the term for many years, and it seems Zhong and colleagues have done likewise.

Despite being referred to as an “HME filter”, the “Thermovent HEPA” used in their study is a “pleated mechanical filter only” according to the classifications above. As expected, this BSF does indeed have some intrinsic HME function, but direct comparison between devices is difficult for a number of reasons. For starters, the humidification performance of any given device is influenced by a number of factors, including the temperature and humidity of gases delivered to the device, ambient temperature, patient temperature, tidal volume and duration of use. These can all be controlled for with standardised laboratory testing, but it may be difficult to extrapolate these results to the clinical environment. They should at least provide a mechanism for comparison between devices, but even here, difficulties arise.

Testing an HME as per the current international standard, ISO 9360-1:2000, quantifies the moisture lost through the device when placed in a standardised test rig. The lower the “moisture loss”, the better the humidification performance. However, the standard that preceded it, ISO 9360:1992, used a different testing method and instead provides a value for the “moisture output” of an HME, with the higher the moisture output, the better its performance. This means there are inconsistencies in reporting humidification performance in both the published literature and manufacturer documentation. Further, because the standardised testing involves testing at different tidal volumes, this can also differ when humidification performance is reported.

Despite these difficulties, an attempt can still be made to compare the performance of the “Thermovent HEPA” BSF used in the Zhong study, with the HME devices used in the studies cited by them. I did this by reviewing both manufacturer documentation, and an assessment of BSFs performed by the Medicines Healthcare Products Regulatory Agency (MHRA) in 20041.

Despite differences in tidal volumes between the test conditions, with a lower tidal volume generally improving humidification performance, the BSF used in the Zhong study has a significantly lower moisture output than that of the HMEs used in the studies cited by them to justify their comments regarding adequate circuit humidity levels. This means that if they are using FGFs of 6 L.min-1 in conjunction with the “Thermavent HEPA” filter, they may not be reaching the suggested minimum humidification level of 20 g.m-3.

As you can see, the issue of humidification of inspired gases in anaesthesia is complicated. In order to be confident we are providing appropriate humidification, we will need to consider not only the FGF and BSF or HME used,  but also other patient, surgical, and anaesthetic factors such as the duration and site of surgery, patient co-morbidities and risk factors, as well as ventilatory parameters such as tidal volume. Further studies, both laboratory and clinically based, would help us make more informed decisions on this front, especially as new products come on to the market, and anaesthetic techniques evolve over time.