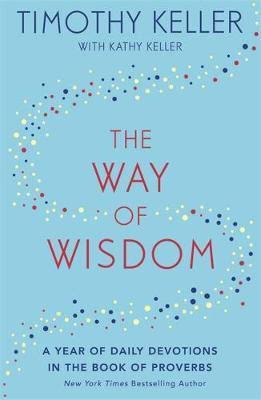 I recently started the fantastic daily devotional book on Proverbs, “The Way of Wisdom”, by Tim & Kathy Keller. It’s full of little nuggets on wisdom and the messy reality of living in a fallen world, but a recent experience with it had quite a big impact on me, and definitely wised me up!

It followed on from the reading nominally set for January 21st, which was about

wisdom com[ing] not through acquisition of knowledge, but through long experience and reflection.

and how we can’t develop good habits, wisdom and resilience overnight if we are suddenly faced with a major crisis. But it was a quote from John Newton that struck me particularly hard.

“The grace of God is as necessary to create a right temper … on the breaking of a china plate as on the death of an only son.”

It helped me to see the role that “trivial evil”, as William Lane Craig refers to it here, can play in helping to shape our character over time, in order to better deal with less trivial evil and suffering. For a long time, similar to Craig, I could see the theoretical possibility for God to act and bring about his purposes through big events where people are forced to ask questions about life, the universe and everything. However I found myself getting quite frustrated, and angry even, when trying to work out why it would be part of God’s good plan to have me stub my toe, or spill my coffee in my lap just after getting dressed for work. But this reading, and the quote from Newton in particular, made me realise that if I couldn’t contain my temper, show self-control, and trust God in these small things, what hope did I have when I was inevitably confronted with the big things!?

So after reading this, I resolved, and asked for God’s help, to do better and trust him when confronted with “trivial evil” and other minor setbacks that I’ve tended to blow out of proportion in the past. Interestingly, I was presented with an opportunity later that day to do just that! I had a meeting at work in the afternoon, but it was only as I approached the hospital that I realised I had timed my arrival to coincide with the overlap between the morning and afternoon nursing shifts. This means the afternoon staff had arrived, but the morning staff were yet to leave, and generally means it’s nigh on impossible to get a park. Going on past experience, it was likely to make me late for my meeting. Usually when this happens, I have a tendency to curse and swear, and drive aggressively looking for any spots that become vacant. The longer it takes to find a park, the angrier I get, and I often have to park a fair way from my intended destination and then get angrier still on a longer than expected walk, which makes me later still!

But this time, with the lesson from Proverbs, Newton & Keller fresh in my mind I took a deep breath, prayed quietly, & acknowledged that this situation was certainly trivial, didn’t really qualify as evil, and asked for God’s help to remain calm and drive safely while waiting for a spot to become available. Can you imagine my surprise then, when within 30 seconds of entering the carpark, a car pulled out of their spot, and I was able  to calmly make the short walk to my meeting with plenty of time to spare!

It would be easy for non-believers to just pass this off as a coincidence, and praying for parking is often the butt of jokes regarding Christianity. But I didn’t actually pray for a parking spot, and this “coincidence” of God’s small mercies in the face of trivial evil following hot on the heels of what I’d read just that morning provides further evidence to me that God is faithful, and worthy of our trust.