One of the (many!) things I love about Human Factors/Ergonomics (HF/E) specialists is that a large chunk of their work involves studying, describing and naming “everyday” human experiences. So when I am listening to their presentations or reading their articles, it is not uncommon for me to have an “A-ha!” moment where they describe something that is very familiar to me. “Oh, that’s what that’s called!” or “Phew! I thought I was the only one that did that sort of thing!”. A relatively recent example of this for me was as at the Human Factors and Ergonomics Society of Australia conference (HFESA17) last year. This time, the everyday experience that now had a name was “Patient Work”.

So, what is Patient Work? Below is a slide from the HFESA17 presentation by Huong Ly Tong which shows the definition given by Anselm Strauss: 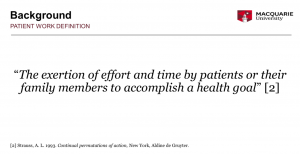 In hindsight, this definition, and the concept of Patient Work itself, seems blindingly obvious, but here I was having done a lot of Patient Work over the last 4 years without ever realising that it was “a thing”. For me, the beauty of now having a name for this thing that I’d expended so much “effort and time” on was that I could now google it, and see what was being done in this field. So off I went, and here is some of what i’ve found so far.

The Strauss quote above is from the early 90’s, and much of his research predates that by many years. However, despite the concept being around for a number of decades now, it appears HF/E practitioners haven’t devoted as much time and effort to Patient Work as they have other areas of healthcare. For example Richard Holden et al. states that while significant effort has been devoted to studying the work design of healthcare professionals,

“there has been relatively little work in “patient-engaged human factors,” or the application of human factors to the health-related work of patients and other nonprofessionals.”

Holden and Mickelson had previously defined “Patient-Engaged Human Factors” as:

“the application of human factors theories and principles, methods and tools, analyses, and interventions to study and improve work done by patients and families, alone or in concert with healthcare professionals”

Holden seems to be a leader in this field at present, and there does appear to be some growing interest in it. My early impression is that some important groundwork has been laid, but much more work needs to be done, because my own experience over the last few years has shown that a lot of Patient Work is poorly designed and implemented, resulting in poor compliance, wasted resources, and poorer outcomes for all involved. In a society with an ageing population, increases in chronic diseases, and ballooning health costs, it’s important that all avenues are explored for efficiency and cost savings. I believe the best way to do that is to ensure all work in healthcare is analysed from an HF/E perspective so that it can be designed and implemented in a way that takes into consideration the strengths and limitations of the workers involved in order to optimise their wellbeing, as well as the well being of the overall healthcare system in which they perform that work. I’m now starting to realise that this must include the huge amount of vitally important, largely invisible, yet always unpaid, Patient Work.