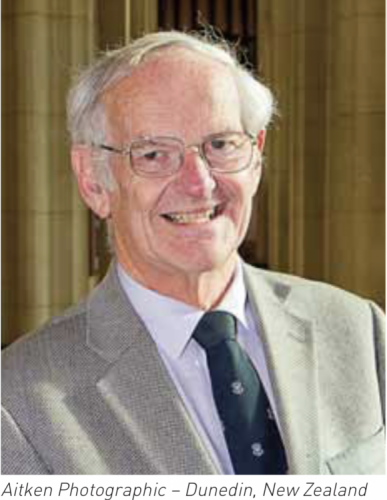 I was deeply saddened to hear of the passing of Professor Geoff Cutfield earlier this year. He’s had a lasting impact on me as a doctor, anaesthetist and a  human being. Following his death, people who were unable to make the funeral in New Zealand were given the opportunity to provide something to be read out at the service to help celebrate the phenomenal life he lead. Below is my contribution to that celebration.

I first met Geoff when I moved to Newcastle in 2007. I was in a new town, a new house, and starting a new career with an SRMO position in critical care. It was a bit daunting. My first rotation was at the Mater ICU where Geoff was one of the consultants, and working with him in this context helped me settle in and left a lasting impression. On top of his extraordinary clinical experience and acumen, he also had an endless supply of physiology & pharmacology knowledge at his finger tips. He would use this, not only to improve patient care, but also provide top quality teaching on topics that were highly relevant not only to our work, but also our exams. He would do this no matter what time of day or night I might have called him for help, and having this impromptu teaching embedded in a clinical context, made the learning even more “sticky”.

This combination of clinical and theoretical bedside teaching would’ve been enough to leave a permanent mark on my professional memory, but I also had the great privilege of attending his Primary Exam tutes. I would always make an effort to get to these, even after night shifts or on my days off. It wasn’t so much the content, though that was great, but his genuine enthusiasm and passion for it. It was infectious. It really inspired me and made me determined to put the effort in myself, and get the most out of his generosity. The amount of time he spent preparing and running the tutes was phenomenal. As well as the content and teaching side of things, he was also able to draw on his vast experience of helping other candidates through exams in terms of preparation and technique, and as a result I tweaked my own study and exam plans significantly, and I was far better prepared as a result. He then took it one step further by having additional teaching and practice sessions in the lead up to the exam at his own house in the evening. His collection of remembered exam questions was legendary, as was the method he used to accumulate them. After every written exam, he would shout the candidates to dinner at the Duke of Wellington, and give us enough alcohol to loosen the tongue and get us remembering, discussing, and writing the questions down while they were still fresh in our memories. It was surprisingly effective! Less surprising was that we became less productive as the night went on! He had taught us well about the effects of alcohol on GABA receptors! I certainly remember that dinner fondly…well, most of it!

I gained even greater appreciation of the effort he put into the Primary Exam teaching after he left Newcastle. A couple of years after his departure, I had the opportunity to co-ordinate the Primary Exam tutorials myself. I had inherited his enthusiasm for teaching, but unfortunately not his knowledge of the subject matter! So while I ran some of the tutes myself, most of my role was organising them and the tutors. But having seen first hand the benefits of a good Primary Exam teaching program, I was keen to make a good fist of it, knowing full well I had no chance of filling Geoff’s hallowed shoes. This experience again drove home the massive time and effort Geoff put into giving his tutes EVERY week, as well as opening his own home up at times. Everyone who benefited from Geoff’s teaching, and there are many, owe a massive debt of gratitude to Libby & the rest of his family.

But towards the end of my second year in that role, in late 2013, a sudden and unfortunate turn of events in my own life ultimately resulted in Geoff having an even bigger impact on my life. One that he probably wasn’t entirely aware of. I was diagnosed with advanced melanoma, and had to stop work immediately. The prognosis was horrible, and there was no expectation of me ever returning to work. But to cut a long story short, I had a good response to some new immunotherapy drugs, and somewhat miraculously, two years later my health had improved significantly and a return to work now seemed plausible. It was a daunting task in many ways, with lots of hoops to jump through and numerous ups and downs along the way. But time and time again it was Geoff’s example that reminded me it was possible. Often unwittingly, my mind would conjure up images of a 60 year old man, with a prosthetic leg, residual deficit from a major stroke, and bilateral hearing aids, getting on his motor bike at some ungodly hour of the night to come into the Mater to help me intubate a patient. Always with a smile, and usually with some teaching, delivered in his lovely kiwi accent. And so, I am back at work now, and even giving the occasional primary tute, and these fond memories of Geoff continue to provide inspiration for me.

So, needless to say, I was deeply saddened to hear of Geoff’s death. But having touched so many, I know his legacy will continue long into the future. Not just through his impact professionally, but also through his family. My thoughts and prayers are with Libby and his family at this difficult time. I hope they can take some comfort knowing that lives have been saved, and changed, because of the sacrifices they have made in allowing Geoff to treat and teach so many, over so many years.